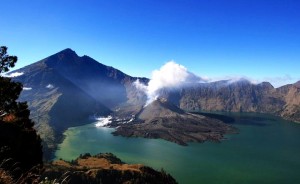 Mount Rinjani is the second highest active volcano rises to 3,726 metres (12,224 ft) in Indonesia on the island of Lombok.
On the top of the volcano is a wide caldera, which is filled partially by the crater lake known as Segara Anak which has a beautiful blue water and estimated to be about 200 metres (660 ft) deep. Religion activities are occasionally done here because the Sasak tribe and Hindu people assume the lake and the mountain Rinjani are sacred places.

Mount Rinjani caldera forming eruption is thought to have occurred in the 1257. This eruption is now considered the likely source of high concentrations of sulfur found in widely dispersed ice core samples and may have been the most powerful volcanic blast since humans learned to write.

Rinjani has the most beautiful view of the mountains in Indonesia. Each year the mountain is visited by many tourists from the local, as well as foreign tourists.